Home Inspections in the Bayside

Mr inspector resides in Bayside and conducts numerous house inspections in the bayside area. This gives him an intimate knowledge of the soil types, drainage and different types of house construction.  He typically favours the 60’s and 70’s homes in the Black Rock, Beaumaris, Hampton and Sandringham areas.

Mr Inspector recently completed a building inspection in Hampton on a beautiful old 60’s home which had solid bones and a few issues that required rectification. Not all building inspection come up with major structural defects and termites but theres always defects in older homes.

If you are buying an older home you should expect that there will be “age related” defects or defects due to poor maintenance.  Not every person maintains their homes.  The same can be said for peoples cars.

Before selling a car it can get detailed and look the part but under all the shine can be expensive problems.  This is the same for a house and we see a lot of homes that have been spruced up but when we look closely during the house inspection we find rotten windows under a new coat of paint, patched up rot that should have been replaced, tile cracks that have been patched with silicon, rusted metal roof sheets that’s been painted.

During our house inspection we pick these things up and so might you, but you won’t see leaking shower recesses that is causing rot to the floor frame, termite damage in the floor joists under the home, mouldy wet soil under the house or no insulation in the roof leak the photo at the building inspection in Hampton yesterday. 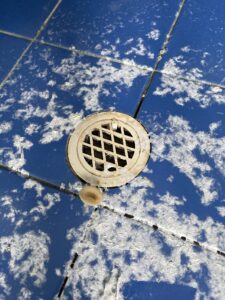 At one recent house inspection in Bayside there was paper (toilet paper) in the shower recess. See the photo on the left.

Some people might just think the kids at the house were up to mischief but this tells an experienced building inspector that there has been or is a current blockage in the sewer.  A blocked sewer can be an expensive fix if the blockage is on your land and pipes need replacing due to being broken of full of tree roots.

When walking around your potential home in Melbourne its is a good idea to have a look at the external drains to see if toilet paper has come up from drains and pipes.

We conduct about 20 home inspections in Melbourne per week.  Some of the house inspection results are pretty good with no major structural defects and not termites found but just about every house inspection we do will show problems including new homes.

Having a detailed building and termite inspection report to read before you buy a home means you won’t have any surprises and expensive costs pop up that you had no idea about.