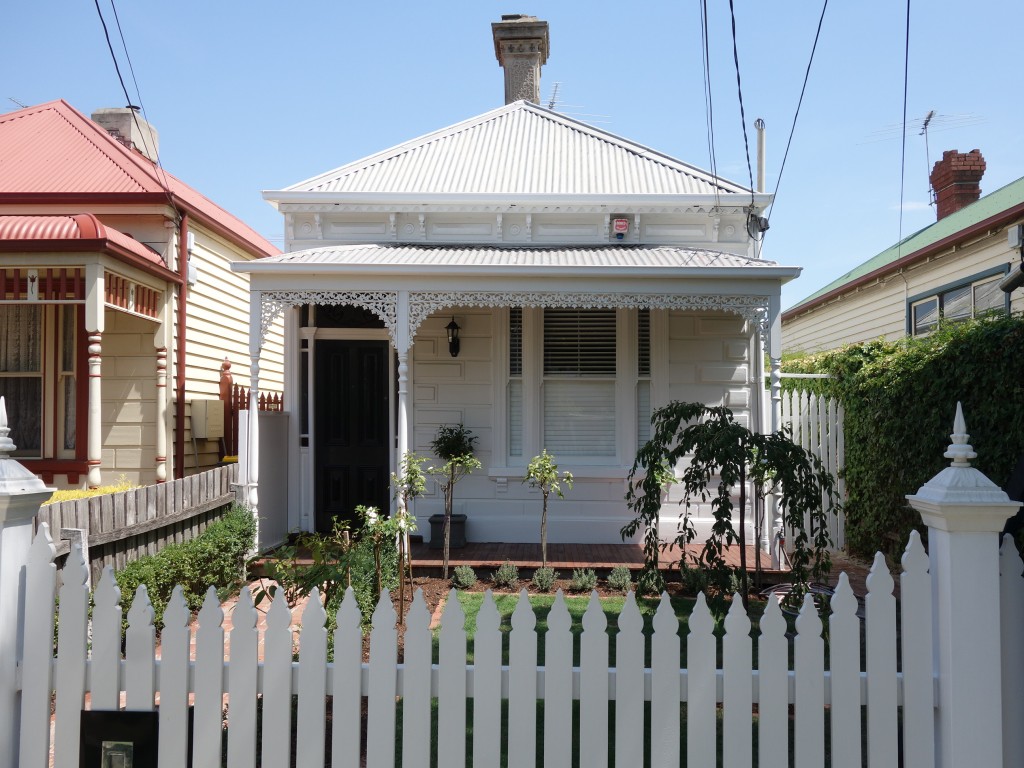 Since 2004, Mr Inspector has been conducting pre-purchase building inspections around Melbourne and assisted numerous home owners and home buyers.

Timber is a naturally occurring organic material and widely used in the construction industry. Your home will contain different grades and different species of timber, and a lot of it.

There are more than 300,00 species of tree throughout the world, producing timber with a wide range of properties, providing the designer with an almost unlimited choice for both structural and decorative applications. Timbers have differing appearances and physical properties.

Timber differs in color, texture and pattern or grain. Timber is durable, light weight and manageable.

Hardness – Timber hardness refers to the natural resistance of the timber to penetration. Hardness of timber is important for flooring, with harder species wearing better and requiring less maintenance than softer species. Baltic pine is a soft timber and easily dented or damage by high heel shoes for example.

Density – Density of timber is influenced by cell structure and size, the actual thickness of the cell walls and the timbers moisture content. Moisture content of timber is usually around 12% moisture substance in a given volume, expressed as kilograms per cubic metre. Density is one of the most reliable indicators of ease of machining/workability, stiffness, joint strength and hardness, fire resistance and the drying characteristics of the timber.

Thermal properties – timber is also natural insulator, the air pockets within its cellular structure making timber a barrier to atmospheric heat and cold. The thermal conductivity of timber structures varies slightly with moisture content, and natural characteristics. Air spaces in the building, such as the void between wall studs and plaster linings are good heat insulators. One of the advantages with houses of timber framed construction is that additional insulating material can be placed in the spaces like wall cavities, roof cavities and the sub floor. During Mr Inspector’s inspections the insulation is checked for correct installment and maintenance/age like issues.

Acoustic properties – Timber can dampen noise vibrations. Timbers has more damping capacity than many other materials available in construction. The damping basically reduces tendency of structures to transmit vibrations through them. Timber can also has a reduced amount of resonant vibrations, therefore it is commonly used where good acoustics are required.

Chemical resistance – Some timber offers considerable resistance than others to attack by a wide variety of chemicals. Timber resistance to a chemical attack is greater in softwoods than in hardwoods. Strong acids and alkalis will destroy timber in time, but the decaying process is relatively slow time wise.

Termite resistance – is influenced by cell size, and type of extractives. Termite resistance can be improved by treatment processes using chemicals. The chemical used has changed over the years with some very effective chemicals being banned. Chemical application is now normally placed in the soil under the home and acts as a barrier, rather than directly on the timber. Some building inspection we attend reveal a red dust on timber members – this is arsenic and was used to eradicate termites. 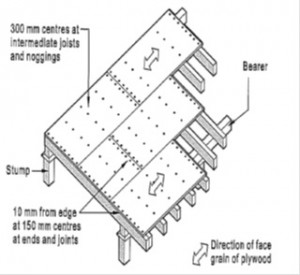 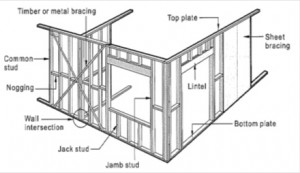 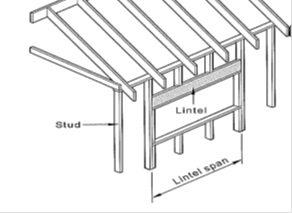 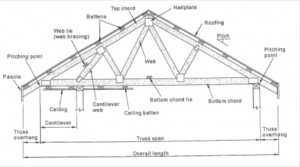 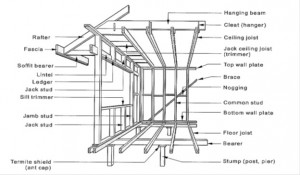 Wood is strong in tension and compression, but can be weak in bending due to the fibrous structure of same.

Shear forces (related to crushing strength of timber) can also affect timber member’s durability ands strength. Stump footings can also be subjected to some ground movement differential settlement and moisture exposure over time. Other issues that can affect timber are foundations movement, temperature changes and gradients, axial shortening, shrinkage or expansion. All these different forces on timber can affect the load bearing capacity over time and issues such as span, timber classifications, length and type of timber, bracing, weather, wind etc are taken into consideration when designing a structure that can combat these forces. These form standards which builders are required to adhere to.

A load which can shorten or crush a timber member produces what is called compressive stresses. This mainly applies to supporting members such as wall studs. 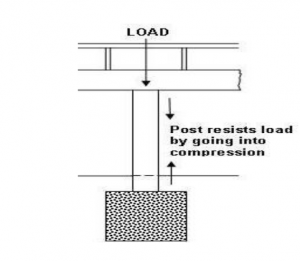 This is a load that stretches a timber member producing tensile stresses. This happens to timber components designed to stop a pulling-apart action, such as the bottom chord in a truss, or the collar tie between two rafters. See diagram below.

Sheer is a load which tends to slide one part of a member over an adjacent part produces shear stresses. This occurs, for example, where a beam is supported at both ends and bears a load.

Below is a diagram of wind and uplift loads on a structure. 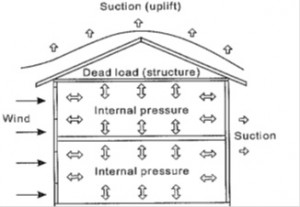 Below is a diagram of some of the different effects different forces can have on a building. 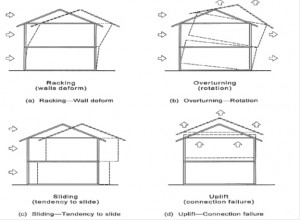 If precautions are not taken and the Australian standards and Building Code is not adhered to during construction, e.g. inappropriate fixings or timber members, inadequate footings depths and width, poorly fixed of braced timber members, poor tie downs, exposed timber members, excessive damp penetration, forces applied to a timber member can result in structural problems occurring either immediately of over time.

These problems include and are not limited to rot, cupping, cracking, bending, splitting, detachment and collapse. Ultimately this can cause unevenness in walls and flooring and potential major structural faults.

Natural weathering is common in exposed timber and thus must be adequately maintained to prolong its life span.

Unseasoned timber is rarely used in timber framing in domestic construction. Unseasoned or “green” timber has a higher moisture content. In unseasoned timber, all of the bound water is present, and at least some of the free moisture is still in the wood. Unseasoned timber can “feel” wet to touch, and if very green water can emanate after a nail is driven in.

Shrinkage – Unseasoned timber shrinks in warmer weather which can cause other associated problems like cupping and bowing, internal wall cracks on ceiling and wall linings. If other materials are connected to the unseasoned timber (e.g. plaster, floating floor boards) then this can cause movement and cracking.

Strength – Unseasoned timber is weaker than seasoned timber because of water in the cell walls. There is a small reduction in strength of wood fibres as moisture content increases.

Creep – Unseasoned timber can have problems associated with creeping. Under long term loading, some sliding will occur. This is creep. Creep is accelerated while water is moving into or out of the wood.

Durability – Timber Fungi and termites need to have moisture to thrive. Moist wood is therefore more vulnerable to biological degradation. Most paints and glues are only really effective if applied to dry wood. Moisture therefore can compromise the durability of timber by making conditions more favourable for biological attack and by reducing the effectiveness of protective coatings.

As per A.s. 1684.2 2006, durable timber is timber that has a specific level of durability that is appropriate to weather conditions, service life expectancy, and other conditions including termite exposure, insect exposure and damp exposure.

Types of insect infestation include borer and termites. To protect against termites a home can be sprayed with a chemical barrier around the perimeter or a chemical spray/flood under the home in the sub floor. Other forms of termite barriers are now utilized in the construction stage which uses materials to block termite entry, e.g. termiguard, Kordon physical barriers.

Borer damage is more commonly found in older homes in floor boards, joists and roof frame members and was normally brought to the home within the timber. Now, due to treatment, not much borer is brought onto site. Borer damage is indicated by a weakness of the timber, small pin holes and a fine talcum powder like dust. Once this is seen they have usually gone and died. Brush on pastes and sprays are available for their eradication.