We report on all visible major defects in our house inspection reports. A major defect is one of sufficient magnitude where rectification has to be carried out in order to avoid unsafe conditions, loss of utility or further deterioration of the property. Down pipes not connected to storm water discharge can be a major defect as water may flow under the home, cause footings subsidence and therefore further deterioration of the property. Other major defects include leaking shower bases, as this defect can cause timber fungal decay (rot) to the floor boards and the floor frame. See one of our house inspection photographs of same below.

Some major defects can be construed as Structural defects. Excess water ponding under the home has the potential to cause differential settlement cracking, stump rot and therefore structural damage. If it is rectified early there may be no problems. See below re a recent house inspection photographs of major defects. 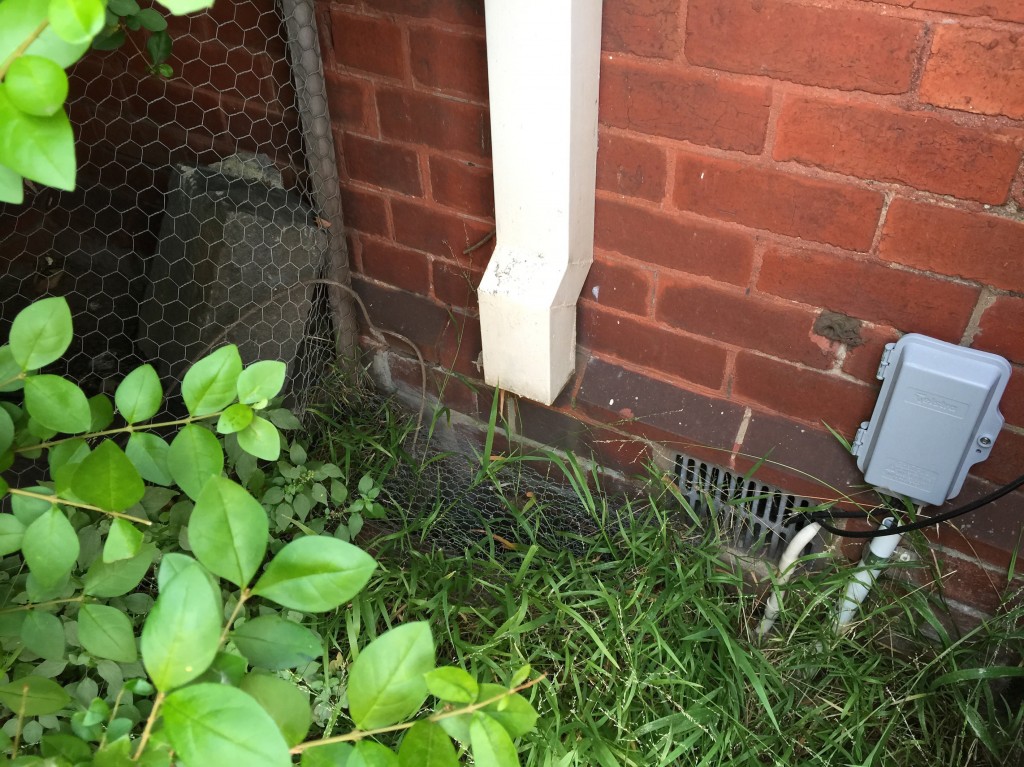 Mr inspector is a qualified building inspector in Chelsea, Melbourne helping home buyers with detailed independent house inspection reports on dwellings they are wishing to purchase.

The above photographs was taken by Mr Inspector during a recent building inspection in Chelsea and depicts a down pipe that has not been adequately connected to storm water. This  has the potential to cause footings and foundation differential settlement (cracking in walls) and is also very attractive to termites. This is considered a major defect as per the definition in the Australian standards for pre-purchase building and pest inspections.  It may be quite easy to rectify is storm pipes in along the side of the home but if they don't thus can be an expensive fix to run storm pipes. 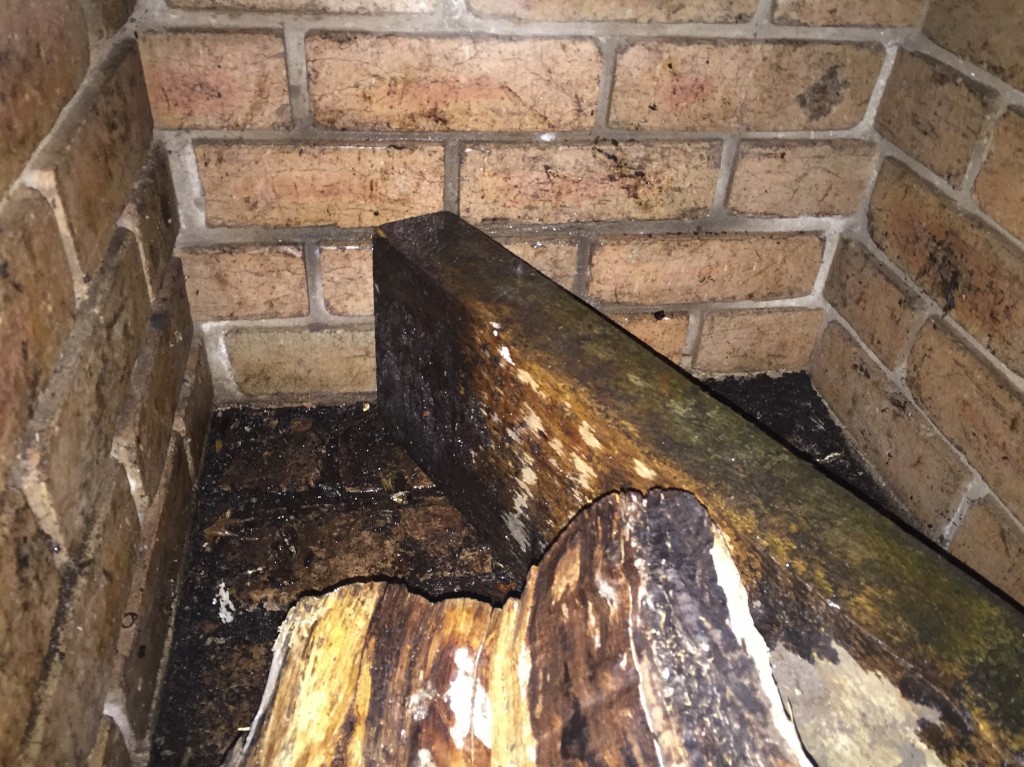 The above photographs was taken during a recent building inspection in Bentleigh and depicts a leaking chimney. Upon closer inspection it was ascertained that the chimney capping had dislodged.  This is considered a major defect due to the fact that further deterioration may occur to the property due to the leak. Although considered a major defect, it is quite easy and cheap to repair. It is important to obtain a qualified building inspector (Diploma of Building Surveying) to assess your potential home prior to purchase so that defects like the one above are rectified as soon as possible.  Depending on your contract you may even be able to discuss repairs by the owner prior to purchase. If you are in the market of purchasing a home in Melbourne we strongly recommend a a thorough and exhaustive building and pest inspection so that you can make an informed decision prior to purchase. 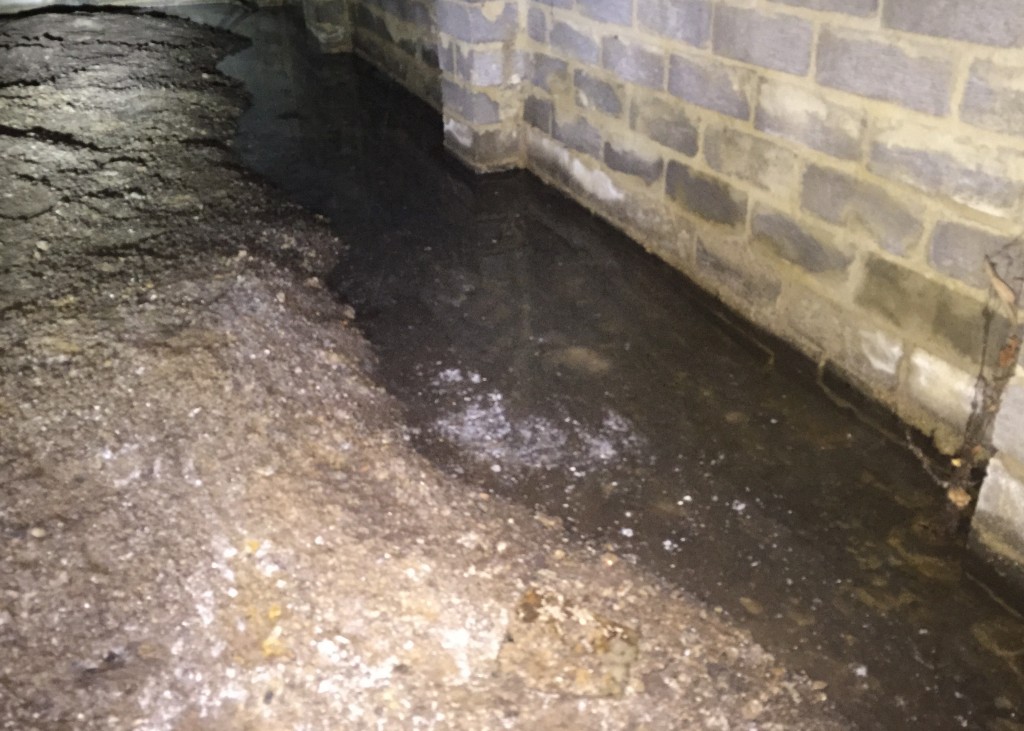 Mr inspector is a qualified building inspector in Melbourne assisting home buys with detailed defects reports on dwellings they are wishing to purchase. Mr Inspector, a qualified building inspector (Diploma Building Surveying) in Melbourne, took the above photograph using a thermal imaging camera during one of his Building Inspections in Melbourne.  It depicts dampness in a ceiling lining (dark color) which once invstigated revealed that the shower recess had a pipe leak behind the tiles which was leaking into the ceiling below.  This was undetectable without the thermal imaging camera. Mr Inspector's qualified and experienced building inspectors in Melbourne conduct expert home inspections to make home owners or buyers be aware of any problems a home may have that require repair.  Knowing what problems need immediate repair can save an unsuspecting home buyer money in future repairs or assist to negotiate the price of a home. "The focus of any house inspection in Melbourne should be to find everything wrong with the property that will cost our clients money", says Peter Alexander, a qualified building inspector and pest inspector and also the director of Mr Inspector.  "Having been in the building inspection industry for over 11 years you get to see a lot of house issues, but it is also a focus of ours to put the findings into perspective. Some major defects can be expensive to rectify, some quite cheap and it is my strong belief that a client should not walk away from every home due to defect presence. Conversely, there are some homes that I would walk away from and i have no qualms telling my clients that." 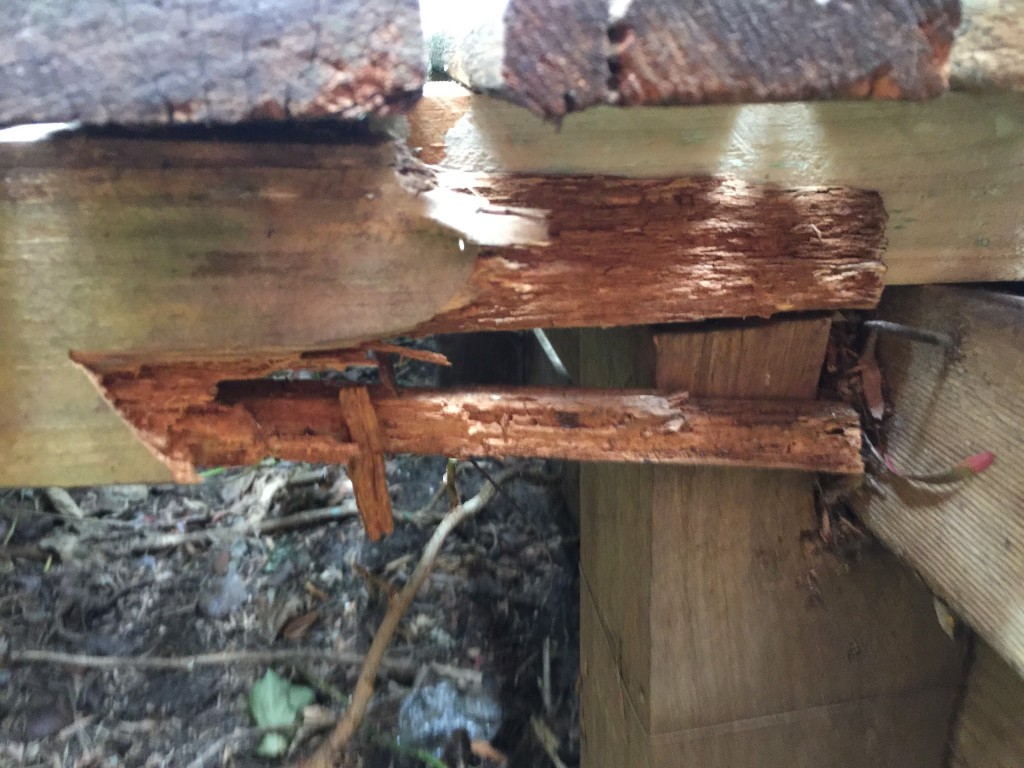 The photograph above was taken by Mr Inspector during a building inspection in St Kilda,  Melbourne and depicts a rear decking with extensive timber rot to supporting timbers. Essentially, although not far above finished ground level, this is considered a safety hazard as well as a structural defect. It is imperative that these defects are detected before one purchases a home as it has the potential to cause injury upon collapse. Any Building Inspection should detect, photograph and explain these types of defects in the house inspection reports, including Major defects, Structural Defects, Minor Defects and Safety Hazards. If you have any questions about building inspections and what they involve, call our qualified building inspectors and we will be able to assist. 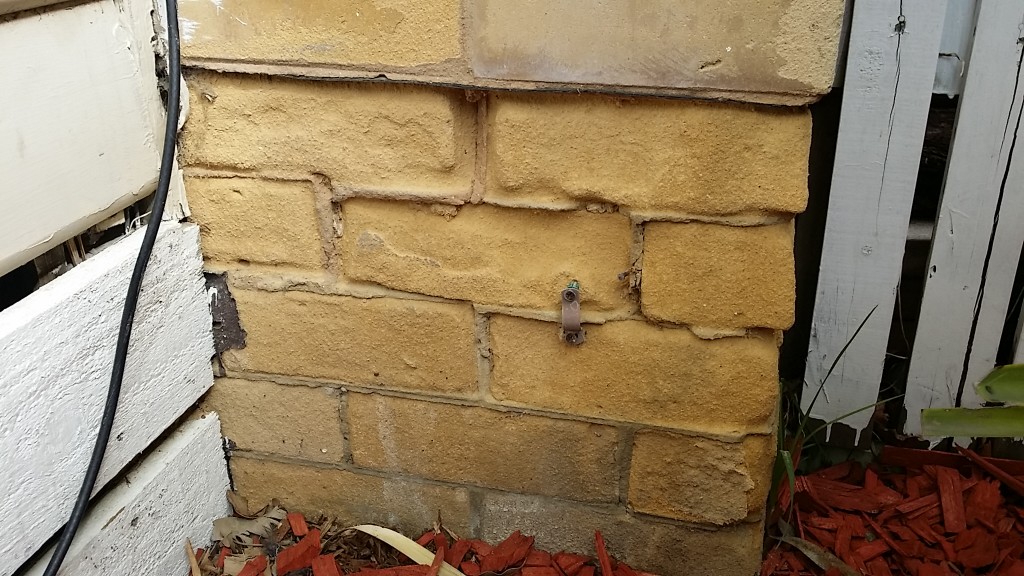 The above photograph was taken by Mr Inspector, a qualified building and pest inspector in Melbourne during a recent building inspection in St Kilda and depicts a lower masonry wall which has deteriorated due to excessive damp contact. This is considered a major defect.  A major defect, in summary, is one which may cause further deterioration of the dwelling. This needs to put into perspective as the word "major" can cause some apprehension in ones mind.  For example, a down pipe not connected to storm water is technically a "major defect" as water not flowing way from the home could cause footings to settle and other associated damp problems. Yet, this is relatively easy to rectify and clients should not be overly concerned by it - just get it fixed. The photo above shows masonry and mortar deterioration due to water/damp penetration over time.  The down pipe near same has never been connected to storm water and the land around the wall falls towards the wall, rather than away from it. It is important to obtain the services of a qualified building inspector to assess a property before you purchase so these issues can be identified and remedied. If you have any queries, please feel free to contact Mr Inspector at www.mrinspector.com.au. 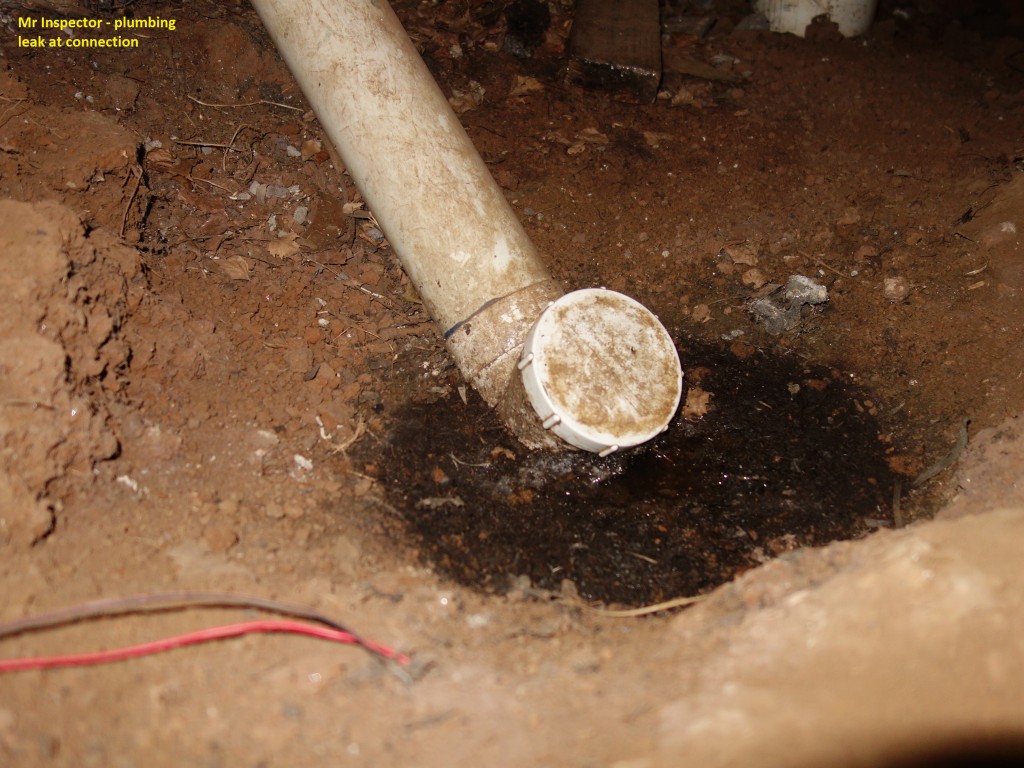 Mr Inspector took the above photograph during one of his building inspections in Edithvale and it shows a leaking plumbing pipe under the home.

Leaking plumbing is not only conducive to termite infestation but can also cause problems with settlement in the homes footings over time.  This issue would be relativity easy and cheap to rectify but is considered a major defect by the building inspector due this leak may cause further problems to the structure of the home. It is important that you have annual building inspections conducted on any home you reside in and most important to obtain a thorough building inspection before you buy a property. Mr Inspector, a qualified Building Inspector in Melbourne took this thermal imaging photograph above during a building inspection in Bentleigh East.

The photographs was taken using the thermal imaging camera which can assist to find leaks that are not visible to the naked eye.  In this building inspection we could see some light staining on the ceiling but could not get a ladder to the area to assess with the moisture meter.  Luckily we have a thermal imaging camera which showed the dark staining which is damp. Above the ceiling is an 1st floor bathroom which also did not give any visible indication of cracked tiles or grout in the shower to indicate a problem.  It turned out that the spindles behind the tiles had a small drip/leak occurring and causing the ceiling damp. Without having the technology available today, this would not normally be picked up during a building inspection as it was not visible. This is just another reason why it is so important to obtain the services of a qualified building inspector who knows what to look for and has the right equipment toc arry out a thorough house inspection. 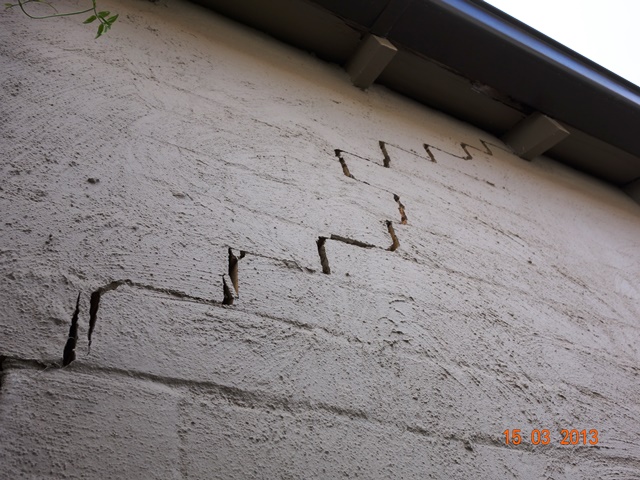 Mr Inspector's experience and knowledge enables him to adequately assess wall cracks and advise on the seriousness of them.

The above photograph was taken by Mr Inspectors qualified Building Inspector during a house inspection in Mentone and depicts wall cracking in brick veneer home.  The pattern and width of this crack affected area normally suggests that some differential settlement has occurred in the footings and foundations and the worst case scenario is underpinning works to rectify. Wall cracks need to be assessed by a building inspector in Melbourne with experience, training and knowledge - Contact Mr Inspector and we can give you advice. 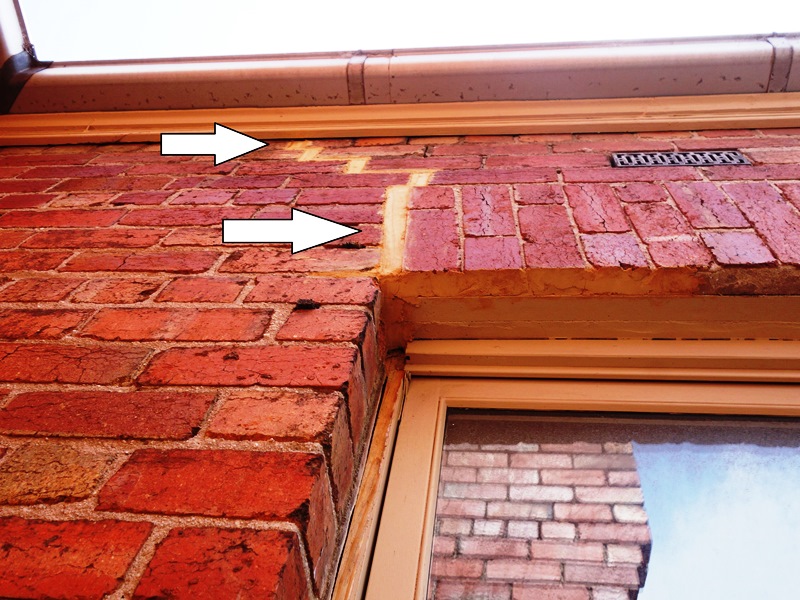 The house inspection Photo shows re-pointed wall cracks above a window.  Re-pointing is carried out on cracks in brick mortar and involves the re-inserting mortar into the crack affected areas.  Re-pointing should only be done when adequately assessed and cracks are classed as dormant otherwise if the cracks are still live cracking will re-appear after re-pointing.  With minor masonry wall cracks it is advisable to monitor the crack for 12 months to ascertain if it gets worse or not before re-pointing. An experienced building inspector will be able to advise you on the significance of masonry wall cracks.
Page 2 of 4«123...»Last »